Ross Custom Leather – Handcrafted Custom Leatherwork by Artist Anne Ross
20/24 Braid Kangaroo Leather Romal Reins
Over 1344 feet, greater than one quarter of one mile, of black, red, and saddle tan kangaroo leather is used to handcraft this set of romal reins.  Reins are a 20 braid over 1/4" leather core.  Romal is a 24 braid over 3/8" leather core.  All braided leather is manually stretched, cut, split and beveled.

At the bit end of reins and both ends of romal there is a long, tapered black pineapple button with three herringbone interweaves of black, saddle tan, and red.  Over 32 feet of leather lace is required to complete visible portion of button. 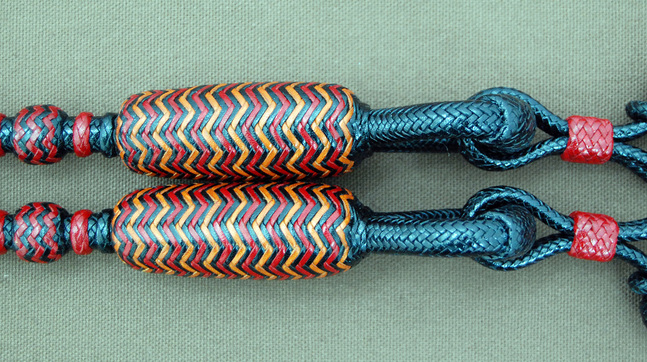 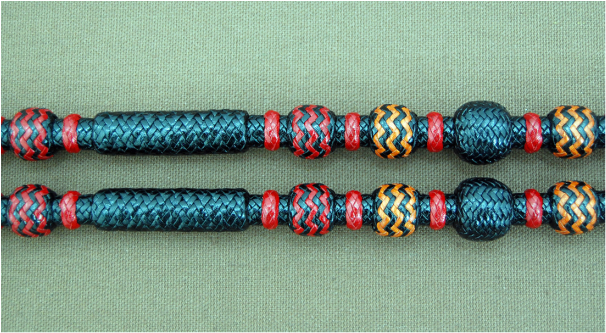 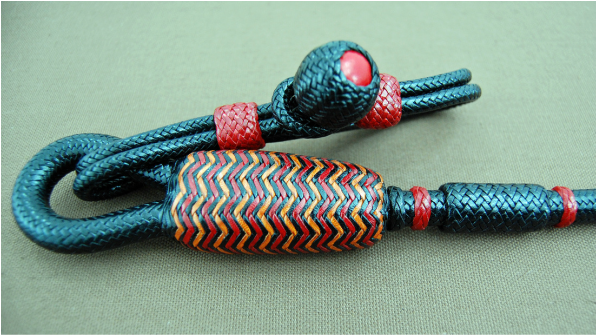 Popper is comprised of four pieces of black kangaroo leather.  Two filler strips of kangaroo leather have been cut smaller than exterior to provide weight and contoured definition to popper.  Popper is double-needle, hand sewn at 12 stitches per inch using approximately 17 feet of red silk thread.  When hand sewing an item with two needles, one needle is inserted from the back and one needle is inserted from the front in the same hole at the same time.  The thread crosses over itself in each hole.  This manner of sewing produces locked threads that will not unravel for several stitches if broken.  A red Turk's head button with herringbone interweave requiring over 10 feet of leather lace attaches popper to romal.